At the intersection of entrepreneur and conductor, inventor, and artist, you will find Scott Winters. Scott is a 1989 A.A. Bethany graduate who recently invented Perfect Unison—revolutionary software that changes the way a projected film is synchronized with live musical performance (orchestra, rock band, spoken address, theater or live scripted events of any kind). Think about the type of music visualizations in Disney’s Fantasia, but during live performance. Bethany has been involved with Scott’s company through the Speechless Film Festival, and he’s now working closely with a senior media arts student. So there’s the context—now let’s go back to the beginning. 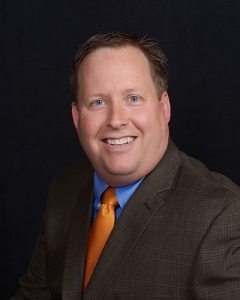 Most of Scott’s educational and professional background is in music. After graduating from Bethany, Scott went on to earn a B.S. from St. Olaf College. He returned to our campus as the Director of Instrumental Music from 1991 to 1994. Scott also founded a non-profit music conservatory in Burnsville called River Ridge Arts. After leading this organization for ten years, Scott returned to conducting. He led the Minnetonka Civic Orchestra for three years while doing quite a bit of professional and semi-pro freelance work.

While conducting in the Twin Cities, Scott also music-directed dozens of musical theater shows. It was during this time that he got the idea for Perfect Unison. Scott was working with several jazz musicians who were also programmers at a local music tech company. They spent intermissions talking about how to replace ‘click tracks,’ the industry standard. These tracks are a series of audio cues playing in the ears of musicians, which aims to keep them synchronized to a moving image. The big problem with click tracks is that they don’t allow for live performance to do what it does best in terms of artistic expression as led by a conductor.

To fix this problem, Scott eventually devised a tool that would invert the synchronization. The Perfect Unison software runs on an iPad, which is “played” like an instrument to match the tempo of a film to that of the performers. In this way, the nuances of live performance are not only maintained, but also used to drive the visuals. Scott developed a prototype, the first working version of which was installed on his computer in December 2012. “I knew immediately that it was more powerful, and likely much more important than the hobby I had considered it,” he commented. From this, his company was born—Ion Concert Media.

Scott spoke at the 2013 League of American Orchestras National Conference in St. Louis, where the initial response was also strong. “The most challenging part of the project to date has been figuring out how to enter the market. We know it will be adopted very quickly, and with five very large market segments already identified, it’s hard to know what steps to take to protect the company from being crushed by opportunity.” It’s very fortunate for Bethany that one of the elements in Ion’s launch plan is a partnership with the Speechless Film Festival.

Similar to Ion Concert Media, Speechless was launched in 2013. The festival was originally conceived as a student competition between Bethany and United International College (UIC) in Zhuhai, China. But the event quickly morphed into a much larger festival for both students and professional filmmakers from all over the world. Over the years, we have made adjustments to position the festival categories with broad appeal while staying true to our niche of honoring low-dialogue films that epitomize the universal art of visual storytelling.

With the support of Ion, Speechless began offering a visual music category with a focus on classical orchestral music. “It was obvious from the start that our company would benefit by supporting and encouraging the development of new visual music works,” commented Scott. “Between my connections with Bethany, the strength of the school’s media arts department, and our need for new visual music works, the idea of sponsoring the visual music category was an obvious choice.” This promo piece for Ion’s Speechless Film Festival category provides the submission details and also demonstrates Scott “playing” Perfect Unison on an iPad:

During the first year, we received a range of submissions from filmmakers and animators alike. Finalists included live-action and visual effects pieces, traditional animations, and abstract/experimental digital animations. From our point of view, the category was a huge success. We filled the Mankato Event Center for the Visual Music Showcase, and the experience of watching the films during live performance by a Mankato Symphony Orchestra ensemble was truly fantastic. The energy in the room was palpable, and we received a great deal of positive feedback.

It was also successful for Ion. “In its first year, we made valuable connections with experts in the field like Michael Betancourt, and with accomplished visual artists like Aleksi Moriarty. It also does not hurt to have a working partnership with Ken Freed and the Mankato Symphony. In fact, after last year’s festival, Ken made a phone call on my behalf that led directly to our first contract with the Minnesota Orchestra.”

Aleksi Moriarty was a finalist in the 2015 visual music category. He was formerly a senior FX animator/technical director on a variety of productions including Starship Troopers, The Matrix, and Minority Report. We were all honored to meet him during the festival, as he traveled from Toronto to see the showcase. Take a look at his visual music piece Sabre Dance, an audience favorite during the visual music showcase at Speechless.

Our relationship with Scott continues. Last spring Scott was greatly in need of someone to help with film transcribing, so he asked Kurt if there were any students who would be interested. Kurt identified now senior Jeremiah Kuehne, a transfer student from South Central College, who began working with Ion as a Media Specialist. 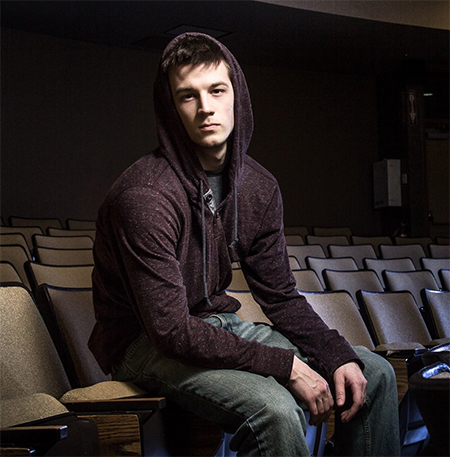 “Ion is a great fit for me in a number of ways,” says Jeremiah. “I am both musical and a filmmaker. I understand the technical workings of a film rather well and also read sheet music and understand a thing or two about how music is put together. My personality fits well with Ion because I am an entrepreneur at heart, which makes it a blast to have such a big part in growing the company. I truly feel like I’ve played a role in the success at Ion even in the short time I have been there, which makes for a very rewarding and exciting experience.”

Shortly after Jeremiah began working for Ion, Scott landed a high-profile job in Santa Barbara, CA. Perfect Unison was put to the test with the 4k projection of an experimental film/animation by Michael Patterson, animation faculty at University of Southern California (USC) School for the Cinematic Arts. “Jeremiah wound up playing an absolutely critical role in improving our film handling process and even developed ideas for tools we hope to build in the future to streamline our production process,” said Scott. “I have always been an educator at heart and it thrills me to be able to give a BLC student real-world job experience. The energy and excitement student workers bring to a young company like Ion is well worth the rare scheduling headache.”

During the USC concert series, Scott and Jeremiah got to interact with top industry professionals including animators from Pixar and Dreamworks. Jeremiah said of the experience: “Being able to visit USC was a dream come true, as it has such a history with filmmaking and at one point I wanted to go to school there. It was very cool to learn more about the industry in LA and also the similarities and differences of receiving an education at a top film school near Hollywood compared to a small Christian college in Mankato, Minnesota.”

Scott told us that since returning from the USC event he is being approached with all sorts of projects. This is a testament to both the impact Perfect Unison is having on the entertainment industry and also to Ion’s growing business credibility. Every time I get the opportunity to speak with Scott, I’m struck with his excitement about upcoming opportunities. Jeremiah is also enthusiastic about Ion’s future. “There is a general optimism and excitement that everyone at Ion shares. With each project we break new ground and do something that has never been achieved before. It’s very exciting how it seems like every month Ion makes a huge step toward becoming a big deal.”

If you’d like to experience the power of Perfect Unison firsthand, Ion’s next gig is the Scandinavian Christmas with the Minnesota Orchestra in Minneapolis on December 19. We’re also currently accepting new submissions for Ion’s category in the 2016 Speechless Film Festival, and the visual music showcase will play in Mankato on Saturday, March 19, 2016.

We’re so proud to see the convergence of fields (media arts, music, technology, and business) and generations through Ion Concert Media. The passion, hard work, and spirit of innovation in Scott and Jeremiah says a lot about Bethany’s arts community. We couldn’t be more exited to be working with Ion and we look forward to seeing what’s next for this growing company.