This year marks the 8th annual Red Eye Film Festival. Started in 2006, Red Eye is a 48 hour movie making challenge where teams of students race to produce a short film over the course of the weekend. The festival ran from Friday, November 22 until Sunday, November 24 with the festival viewing taking place the Monday after.

Seven teams entered the competition this year. In the past teams were required to write, film, and edit everything within the 48 hour time period. This time around team leaders were emailed their prompt on the Monday before the festival and were allowed to begin scripting and planning as soon as they received the prompt. This gave students a full four days for concept development. 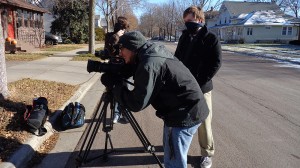 Prompts are usually quotes, props, or words that must appear somewhere in the film.

The studio held an equipment lottery later in the week randomly assigning each team a camera to use for the weekend. If teams were unfamiliar with the camera they were given (or planned to use their own) they were allowed to trade. The camera gear was picked up on Friday afternoon and at 5:00 p.m. on Friday evening, they were allowed to begin shooting.

Finished films were due by 5:00 p.m. on Sunday evening, so the next 48 hours are typically marathon sessions of filming, editing, and composing.

“There was lots of teamwork,” said freshman Jason Lillo. “I found my role within minutes of being with the group. I learned so much from working with Landon and other more experienced students. It was a great weekend.” 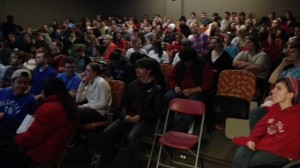 Two award winners were chosen during the festival showcase. The Festival Favorite is the best film as voted by the audience and that honor goes to Anthony Miller and his team for Tempus Fugit, a short film of time lapses. The Best Of Festival award is chosen by a panel of judges based on criteria such as cinematography, script writing, and sound design. Landon Brands and his team won Best of Festival this year for their film Vocal Chords.

(Since some of these films will be submitted to other festivals in the future, we can’t always post the videos online. Some of the films may be submitted to the Speechless Film Festival this spring, so you might be able to catch them there!)

The Red Eye Film Festival serves a number of different purposes. At a basic level it provides a tight framework to allow students to very quickly produce a finished, polished piece. It allows students to work together with teams of friends and peers and practice planning, delegating, and many other skills we talk about in the classroom. Finally, it also allows students an opportunity to experiment and have fun, trying things they might not be able to work into a class assignment!