Students Learn How To Make Professional Press Conference For Facebook

Students Learn How To Make Professional Press Conference For Facebook

The Aussie Peppers of the NPF made a splash this week in trading for local phenom pitcher Coley Ries. The trade makes Ries the first player on the Peppers roster for their inaugural season. This past Wednesday, the Peppers tasked their newly hired interns to assist in live streaming the press conference from Bethany’s production studio.

The three media interns, who attend Bethany, had to learn quickly how to produce a press conference. They worked with Matt Mangulis, Peppers General Manager, to build a checklist of requirements for the event.

“The investment we are making is a serious investment,” Mangulis said. With any new venture whether it be business or in this case, a new sports team, establishing credibility is a big part of getting noticed and people taking you seriously. He said, “From a professional looking logo, web, social, and media content. Everything needs to look good. People want to identify with a legit brand and that’s what we are aiming to do.”

The same goes for the interns who are looking to learn valuable skills and build their credibility as well. “As an intern, I want to show my supervisor that I am taking my position seriously and that it isn’t just a summer job,” said fellow intern Louise Dhuyvetter. “It is a unique learning experience that I am excited to have.”

Mangulis created the press release and invited the local media and softball community to attend. The interns were tasked with building graphics, setting up the studio camera, podium, and making the microphone flags all in two days’ notice. The interns set up and tested everything the day before the event. The press conference was streamed live on the Peppers Facebook page. 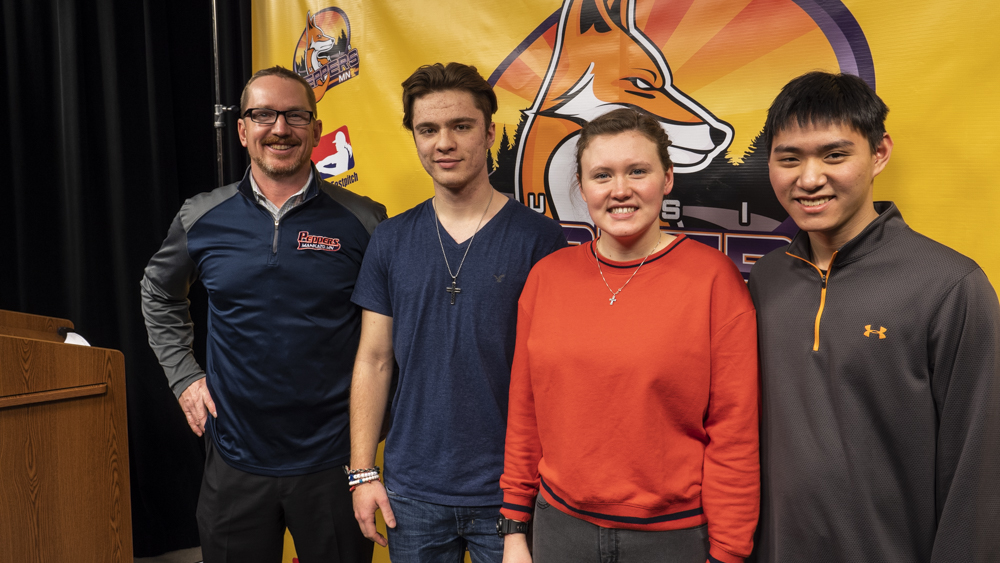 The interns learned the importance of preparation. “I’ve heard it is better to be overprepared than underprepared because you never know what to expect,” said media intern Kory Kochevar. That preparation sets the foundation for their work as the team prepares for the player draft in April.

The interns will be tasked with creating content for the Aussie Peppers social media accounts. In doing so, the interns will get a firsthand experience at engaging with an audience not only here in the Mankato area but also down under as most of the players will be from Australia.

Next up for the interns will be planning content for the NPF player draft in April followed by the season opener on June 9th at Caswell Park in North Mankato. “This was my first press conference,” said Mangulis, “BLC Studios and our interns made us look like we’ve done this before. It’s great to work with people that know what they are doing because that gives anyone engaged confidence that this is going to be professional”.