Current students, local alums, and all interested: next Thursday we will be welcoming Mankato-native Rob Shanahan to campus. Rob’s photographs have appeared in numerous international ad campaigns, galleries, records, books, and magazines around the globe. Rob plays drums with the Hollywood Stones, the premier Rolling Stones tribute band. His sensitivities as a musician have made him the first choice for many of the world’s top artists.

Rob’s portfolio includes photographs of Paul McCartney and Ringo Starr, Avril Lavigne, Ed Sheeran, Eddie Van Halen, Steven Tyler, and Joe Perry, among others. Check out his web gallery for more. Rob will join us for an afternoon workshop in Honsey Hall Studio A, in which he will demonstrate various lighting scenarios, He will also present an evening talk in the film viewing room. Expect to hear his story and see his work! 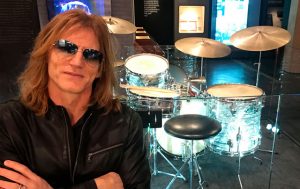