What Bethany Lutheran Students Are Teaching Broadcasters About Esports

What Bethany Lutheran Students Are Teaching Broadcasters About Esports

Esports is on the rise. This is nothing new. However, the gap between how traditional broadcasters operate and how esports fans consume their favorite games shows disconnect in the industry.

Before we get too deep, what exactly is esports? According to CNN, esports is described as the world of competitive, organized video gaming. Competitors from different leagues or teams face off in the same games that are popular with at-home gamers.

Monumental change doesn’t happen overnight in the broadcast industry. Live televised sporting events have only been around for 80 years. Broadcast trends can take several years to get their footing. Then the industry needs to adapt and evolve. And that is what is happening in the late teens of this century. Since ESPN’s first live esports broadcast in 2015, the esports boom is in full explosion and the broadcast world is turned upside down in an attempt to grab a slice of this growing lucrative business. According to the Esports Observer, Goldman Sachs recently projected that esports annual revenue to grow from $655M in 2017 to $2.96B by 2022.

The problem production teams are facing is that broadcasting esports is different than your traditional football or baseball events. Esports is an interactive event. The fans dictate the content. “The other challenge is that in esports, the idea that the audience is king is taken to all new levels,” according to Mike Bembenek, director of production for FaceIt.

KEEPING UP WITH THE JONESES 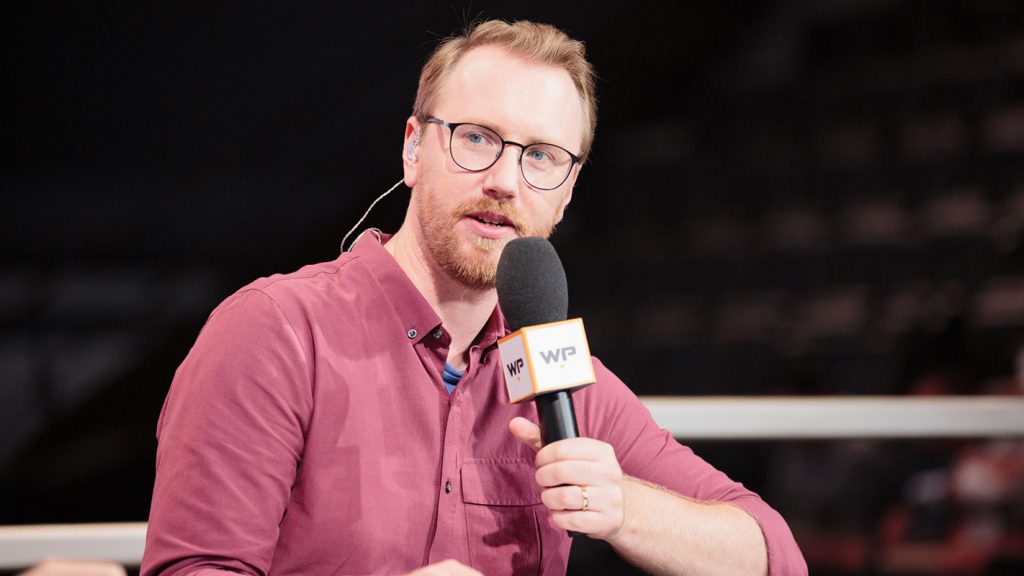 “There’s definitely a disconnect in the industry at the moment between producers, etc., that come from traditional sports and a player, talent, and fan base that comes from a grass-roots esports background,” – says veteran caster, Erik Lonnquist, a.k.a. DoA & Bethany Alum

Adapting will take time. “There’s definitely a disconnect in the industry at the moment between producers, etc. that come from traditional sports and a player, talent, and fan base that comes from a grass-roots esports background,” says Erik Lonnquist, famously known as DOA and Overwatch League shout caster. Lonnquist continues, “The best production relationship we can have at the professional level in esports right now is one where the endemic esports staff are willing to listen to the experience of the traditional sports staff, but the traditional sports staff are also willing to listen to the endemic esports staff and make adjustments to the broadcast they might be uncomfortable with. A lot of things that feel “less professional” for t-sports people are what the esports people are used to and expect.”

Think back, the rise of a lot of traditional sports is thanks to the advances of technology and the ability to get the fans closer to the action. New formats, such as 4k and UHD are the latest industry buzz words, but still look to be a few years out to becoming the norm in households.

Esports is consumed primarily on the internet, so there are challenges to consider. 4k for one is not an option. James Dean, managing director of ESL UK told TVB Europe in 2018, “Esports formats are a little bit different to TV formats, We’re not exploring 4K or UHD yet and the reason for that is that sometimes the internet is still a bottleneck, many home internet connections still don’t really have the speed to stably stream that 4K content. So for us it’s not something we’re looking at as yet. We work in 1080p 60fps which is slightly different to TV. When you play a video game it has very fast, jumpy movement.”

Consider this, traditional sports battle the elements. Such as weather, camera locations, crew availability, whereas esports, you can view any angle from any where in the game. Game designers continue to add the broadcast element to the game to improve the viewer experience.

Inside look at how traditional sports prepare for an event vs esports and the Overwatch League.

Behind the scenes – Overwatch League

Behind the scenes – Fox NFL Football

The trains are on the track and headed for a major collision. Up until now, traditional sports (t-sports) needed major cable and over-the-air networks to showcase their sports to grow revenue outside tickets, sponsorship and merchandise. Just look at the college sports scene. According to awfulannouncing.com, the University of Michigan athletic department received $51 million in 2018 and projected to get $52.1 million in 2019 thanks to the Big Ten Network and its TV deals with Fox Sports and ESPN.

Overwatch League landed the largest esports streaming deal with Twitch at $90 million, plus it also has a broadcast deal with ESPN. If Overwatch is a sign of things to come, then the roles are reversing. Find the streaming deal first, broadcast money will follow.

WHAT ELSE DO WE NEED TO KNOW

“First of all, it’s free to consume, it’s on your phone 24/7,” according to Bethany esports coach Seth Grabow, who recently joined the BLC Studios podcast. “It takes a lot less man power to produce this content. All of these venues are permanent, there is less wear and tear on gear, so it is cheaper to produce.” Grabow also touched on a major point. Gamers are their own brands. Professional t-sports is all about the team and its fans. While that is the case for gamer’s and their teams, the gamers brand is just as important. “Gamers are very smart when it comes to branding and social media,” he said, “They are very talented and are looking to help grow their personal brand and help their school.” 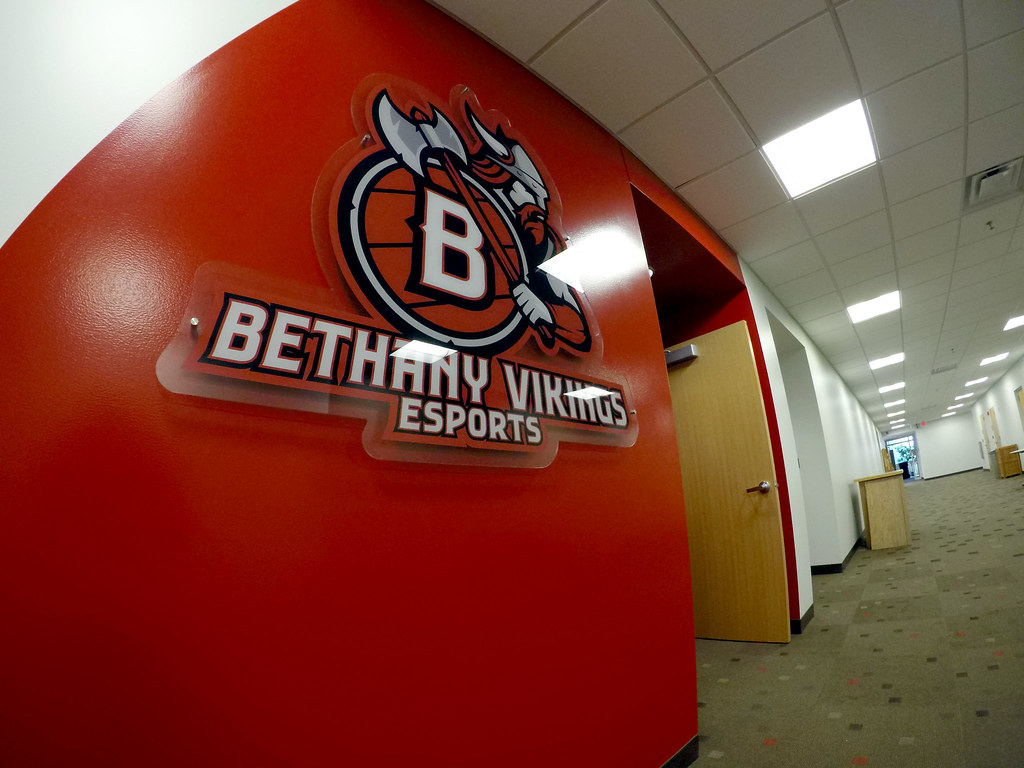 At least seven state high school associations are offering esports as a varsity sport. Collegiate esports are on the rise as well. Bethany Lutheran College announced their intent to add varsity esports for the fall of 2019. For Bethany, the addition of esports compliments their broadcast program. “In launching esports, we had another opportunity in mind,” said Dr. Gene Pfeifer, President of Bethany Lutheran College, “Bethany has a niche, something it’s really known for, and that is its broadcasting program. For 20 years we have been broadcasting Minnesota State’s division one hockey games. I think that is one thing that will give our program a leg up.”

“I am not a big fan of traditional sports. But I love esports and I love broadcasting and they mesh perfectly between the two. There are a ton of jobs out there.” – Robert Barr, senior at Bethany Lutheran College

A whole new job market is being established with esports. For Bethany senior, Robert Barr an avid esports player, who also specializes in sports broadcasting, the timing is great to get reps at streaming and producing esports content while in college. “I was so excited about it,” said Barr. “I am not a big fan of traditional sports. But I love esports and I love broadcasting and they mesh perfectly between the two. There are a ton of jobs out there.”

One of those leading job sites is hitmarkerjobs.com which showcases employment from many aspects of esports to companies all over the world. In April 2019, Sinclair launched a 24/7 esports streaming channel called ESR. Growth is constant in esports. The drive to become a professional video gamer remains high. According to limelight.com’s study, 36 percent of gamers would quit their jobs if they could support themselves as professional video gamers.

“[Esports] Jobs are everywhere,” said Mike Leyrer, free-lance graphic operator and designer in New York. “I see co-workers in Red Hook in Brooklyn working on esports, jobs are popping up all over the place.” 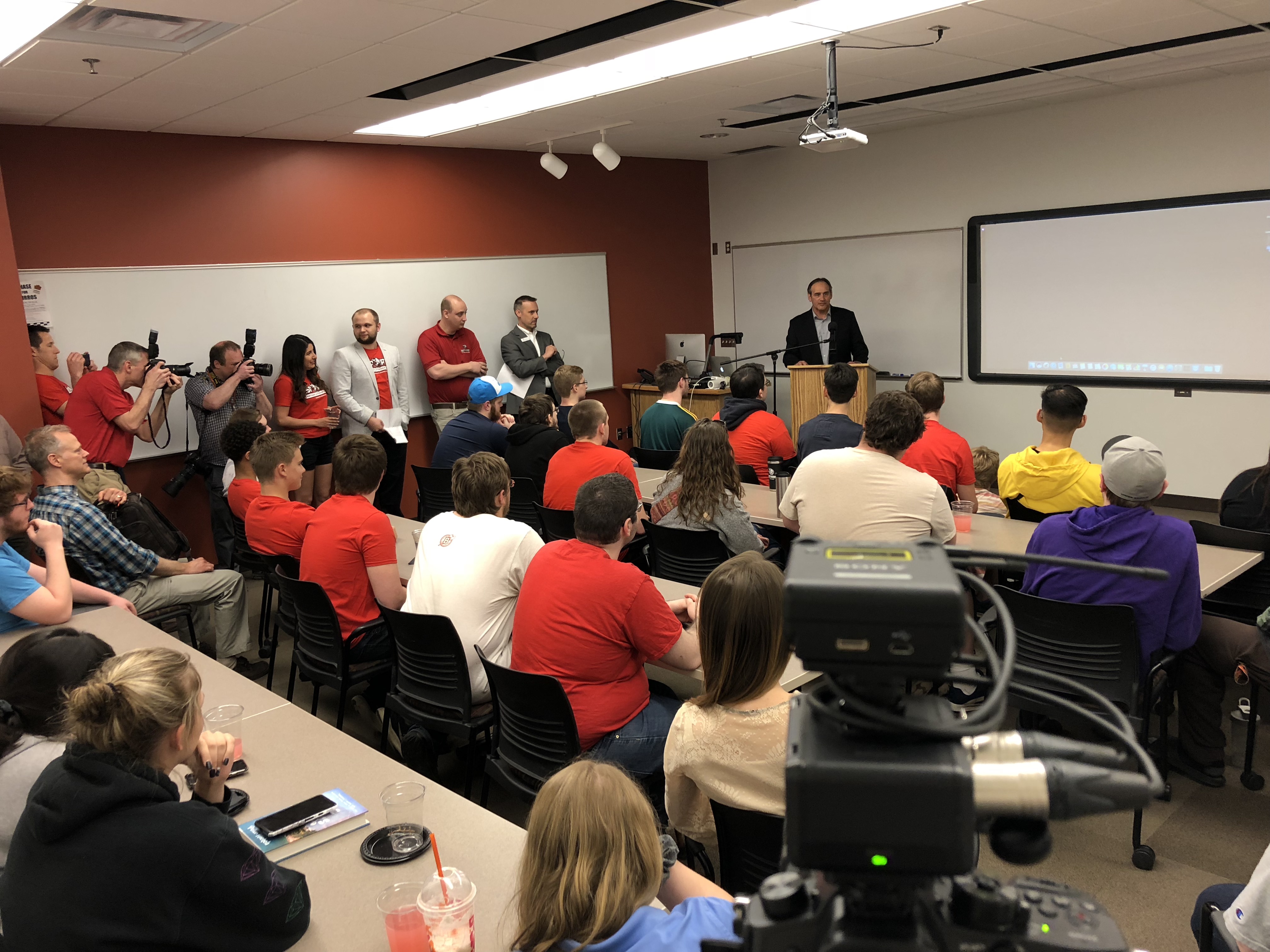 WHERE IS THIS ALL HEADED

Esports is unique to broadcast because the brand identities that are vested have the control and can have very specific ideas and interactions with the audience specific to the player and game. As traditional sports broadcasters look to work in this industry, they will be more successful when they are open to the new waves of gamer specific industry ideas. For the college scene like Bethany Lutheran, it is a great opportunity for media students to learn a new industry where these jobs didn’t exist five years ago.

Lonnquist said, “We’ve seen plenty of esports broadcasts simply try to be like the NFL and the result is a bland product that’s un-relatable for the fans.” Time for the traditional broadcasters to adapt and get on board.